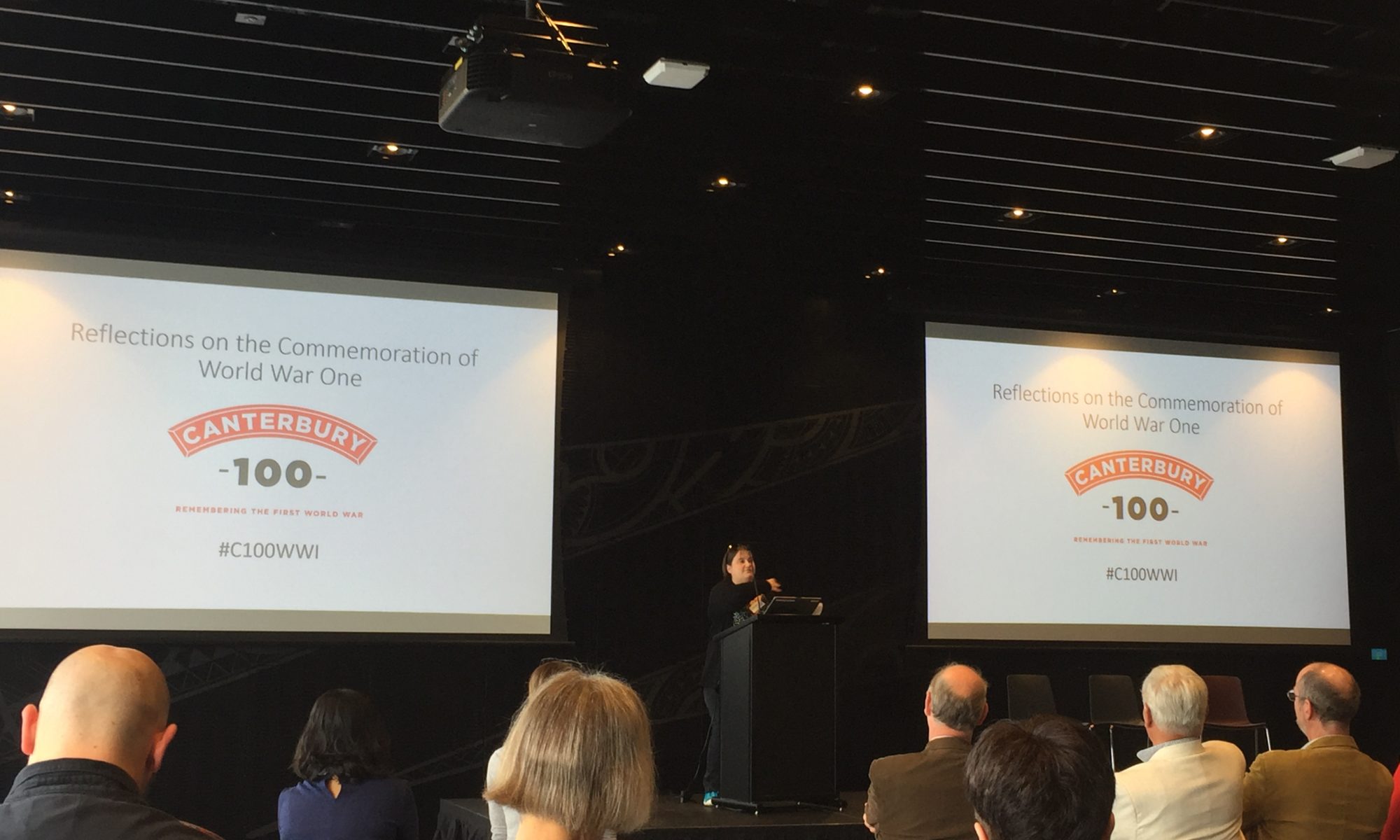 Between 22 and 23 November 2018, the conference Reflections on the Commemoration of World War One  took place at Tūranga (Central Library) in Christchurch, New Zealand organised by Canterbury 100, a collaborative project co-ordinated by the region’s major cultural and heritage institutions, telling the stories and experiences of Canterbury people during the First World War. Much like our own ‘Reflections’ project, the conference committee understood 2018 – the end of the centenary of the war – as a timely opportunity to consider the ways in which the conflict has been commemorated within galleries, libraries, archives and museums around New Zealand and the world.

The conference was headlined by three excellent keynote papers offering perspectives from Australia, Canada and India. Dr Tim Cook (Canadian War Museum) opened the conference in a paper that explored Canadian soldiers’ wartime culture, formed in spaces of violence, and the way it transformed into a veterans’ culture forging, in the post-war period, different strands of memory and meaning from that of others who had not served in uniform. Professor Santanu Das (University of Oxford) considered one of the most important legacies of the centennial commemorations – the greater recognition of the contribution of non-white colonial troops – and the processes of double sanitisation that have unfolded as a result: the erasure of the ignominies of race and colonialism as well as the cleansing brutality and violence of combat. Professor Joy Damousi (University of Melbourne) considered how, in the 21stcentury, remembering violence of the First World War has increasingly focused on three sites: blood, bodies and bones. New forms of commemoration – such as the reinternment, in 2010, of 250 Australian soldiers killed during the Battle of Fromelles in July 1916, have concentrated exclusively on the body involving new technologies such as DNA testing and retrieval and exhumation of bones. These ‘modern’ acts of commemoration are highly contested but have received overwhelming support from the families and descendants of those exhumed providing them with a full reburial and ceremony.

The conference was open to museum professionals, historians, librarians, academics, students, film makers, artists, writers, researchers, and government sector contributors and was the ideal opportunity to share some of the initial research findings from our own ‘Reflections’ project and place them within a broader context of Antipodean commemorative activity. My paper outlined three predominant strands evident in the UK centenary activities we have been exploring at both national and community level: the mobilisation of the familial and local; the centrality of death, loss and tragedy; and the diversification of narratives and perspectives beyond Anglocentric experiences and military dead. I concluded by reflecting on the way centenary commemorations have unfolded, in the words of David Harvey and James Wallis (2018), ‘amid an era of existential crises – both for European identity and for the United Kingdom and its constituent parts’. While on the surface, politicians have attempted to utilise the centenary as a moment of national ‘coming together’, an examination of grassroots heritage projects reveals a resistance to being conscripted into a ‘one-size-fits all’ vision of British identity. The fracture lines of modern British politics and society are present within these heritage projects highlighting the complex and entangled memories and histories of the citizens and nations of the UK and its former empire.

These themes resonated throughout the papers I heard over the course of the two days. Sebastiaan Vandenbogaerde (Ghent University) reflected on the political tensions, instrumentalization of and struggle for memory inherent within Belgium’s engagement with the centenary commemorations. It was Belgian’s regional governments in Flanders, Brussels Region and Wallonia who led the commemoration plan deciding on their own priority areas and seizing the moment to profile themselves in an international forum. Hanna Smyth (University of Oxford) discussed the challenges and lessons learned from her own community-based centenary research project, funded by the Heritage Lottery Fund, ‘Global War Graves Leicester’, including negotiating and integrating local and transnational perspectives; public engagement with diverse communities; the relationship between the dead, identity and commemoration; and the potential of material culture as a focal point for centenary public engagement. In a panel on ‘Legacies’ Simon Moody (Air Force Museum of New Zealand), Katie Pickles (University of Canterbury) and Sarafina Pagnotta (Carleton University, Ottawa) explored what narratives of the war – whether of other fronts, non-combatants, or material culture – have been lost and to what degree the centenary has provided an opportunity to shine a light on them again. A special panel was convened to reflect on one of New Zealand’s major centenary outputs – Weta Workshop and Te Papa’s exhibition ‘Gallipoli: The Scale of our War’– and exposed the differing perspectives between academics, curators and the exhibition’s Historical Director on issues such as the relationship between commercial design and heritage; affective engagement and critical reflection; and centenary initiatives and state structures of memory and identity in Australia and New Zealand.

It was a thoroughly stimulating two days that has given me plenty of food for thought as our ‘Reflections’ team move into the final stages of data gathering over the spring of 2019. Much like our initial findings in the UK context, the programme of papers highlighted how old and new narratives of the war have been presented in exhibitions, public programmes and research throughout 2014 to 2018. Most relevant to our own ‘Reflections’ project was the fact that many of these interpretations have been the result of collaborations that have joined repositories with academia, other institutions and the community.